In the 2019/20 Ontario budget health care was budgeted at $59.97 billion.  That was subsequently increased by over $450 million to $60.42 billion, mostly through Supplementary Estimates late in the fiscal year. 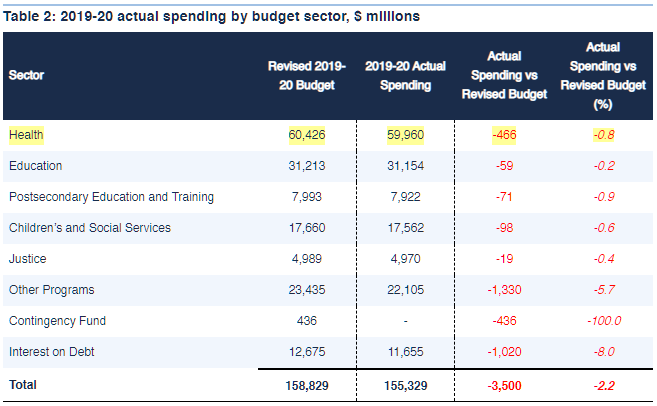 It's a little hard to take Ford's protestations that he has no money for pandemic pay, and won't pay for more time to care, when he spends $466 million less on health care than he budgeted.

One area with lower than projected expenditures was the line item for local health agencies.  This is odd as public health is rather important for the response to a pandemic -- like, say, COVID-19.  Odder still, the government actually increased the local health agency budgets by $40.7 million during the course of the fiscal year.  But the government actually spent $45.3 million less than the revised budget -- in fact $4.6 million less than the original budget.

Why would a government under-spend its own public health budget in the first 3 months of a major infectious disease outbreak?

A second area that got less than budgeted was "LHIN" funding.  LHIN funding is actually mostly money for hospitals, long-term care, home care and some other health care providers.    Here the government spent $91 million less than they planned in the 2019/20 budget.   That is 0.3% less than budgeted.  Unfortunately, it is not made clear how this affected each of the sub-sectors funded by the LHINs -- hospitals, LTC, home care -- or, for that matter, the LHIN organizations themselves.

Looking at the finer details, the docs got $82 million more than the original budget plan (no surprise), e-Health was down $42 million (about 17%), and e-Health capital spending was also down -- about 39% from its original budget.

Despite COVID-19, the overall 2019/20 deficit is lower than the government projected in the early spring of 2020. The deficit is now projected by the FAO at $8.7 billion, half a billion down from the $9.2 billion the government had projected.  Governments, especially conservative ones, often over-estimate deficits.

The current $8.7 billion FAO estimate, however, is $2.6 billion more than the FAO prediction in early March 2020, just before the COVID-19 lockdown.  The FAO estimate was more reasonable than the government's early spring estimate - -but then COVID-19 hit hard.

Key to the deficit being higher than the FAO expected was that 2019/20 revenues were down $2 billion over what was projected by the government in March 2020. The FAO puts that fall down to COVID-19, no doubt with some reason.

Nevertheless,  this is a pretty big contraction given two factors.  [1] The government made its estimate for 2019/20 revenue near the very end of the fiscal year and just as COVID-19 was about to hit Ontario hard. [2] The lock-down and its impact on the economy only began in mid-March, just about three weeks before the fiscal year ended.  So the $2 billion hit to revenue appears to have occurred over a very short period of time.

Overall expenditures were down $2.3 billion compared to the government’s March 2020 estimate,  primarily coming out of health, post secondary education and training, children's and social services, and (thanks to falling interest rates) interest on debt  (again, there could not have been much surprise for government in that).

The $2.3 billion shortfall in expenditures is no surprise: it is part of a long tradition of under-spending budgets and is roughly in line with the FAO's estimate in March.

Here’s the link to the full FAO report:  https://www.fao-on.org/en/Blog/Publications/2019-20-expenditure-monitor-q4

June 18, 2020
The proposed reforms through Bill 175 will privatize health care services, weaken public oversight, remove legislative protections, undermine home care working conditions, and unleash an untested, home care experiment. Chaos beckons.Bill 175 is permissive, allowing a laissez-faire framework for home and community care.  It repeals the more detailed Home Care and Community Services Act, 1994 and leaves most details to policy or regulation. Deviously, the government has made the Bill (Connecting People to Home and Community Care Act, 2020) little more than an empty shell that doesn't even establish a new home and community act.  So, for example, the Home Care Bill of Rights is not in the proposed legislation.  Instead, it may be put into regulation.  This approach removes the public accountability that comes with legislation.  Regulations and policies are changed with little public consultation.  One would think that in today’s world a Home Care Bill of Rights would not be removed fr…
Post a Comment
Read more

Ontario revenue up $1.5 billion since November - but no new health care spending announced

January 31, 2020
Ontario’s third quarter finances came out yesterday.  They confirm that although planned health care funding has increased $404.1 million since the 2019/20 Budget, no further increase has been achieved since November's Ontario Economic Outlook and Fiscal Review.

While the lack of new progress since the fall is disappointing, the $404.1 million is a 0.64% funding increasefor health care since the Budget.  Total health care funding for 2019/20 is now planned to increase 3.1% since 2018/19.
Also notable: Total revenue is projected to be $157.2 billion in 2019–20, $3.1 billion higher than the 2019 Budget projection and $1.68 billion higher than expected in the fall 2019 Ontario Economic Outlook and Fiscal Review. Program expenses are $2.45 billion higher than in the 2019/20 Budget. The total increase for the year compared to last year is $3.9 billion (so far).  So, in the Budget, program funding was increased 0.91%, while, since then, program funding was increased a …
Post a Comment
Read more

March 04, 2020
As usual, the provincial government is under-spending its (revised) budget.  Based on figures for provincial expenditures for the the first nine months of the fiscal year, the government-funded Financial Accountability Office (FAO) estimates that the government will under-spend its budget by about $2 billion this year.
While that sounds like quite a bit -- it is actually less than usual.  Over the last ten years, the province has spent $3.3 billion less than budgeted on average.


Combined with the expected non-use of the government’s $1 billion "reserve" (the reserve is an amount set aside every year for unexpected expenses), the FAO estimates the deficit will be only $6.1 billion, almost $3 billion less than predicted in the government’s own, very recent third-quarter report.
Health care expenditures are under-spent by $400 million (0.9%) through the first three quarters of the fiscal year, primarily due to under-spending on LHINs for hospitals, LTC, home care, etc. (0.5…
Post a Comment
Read more