Is the attack on public sector workers justified?

October 05, 2012
Dwight Duncan has justified the government's proposal to remove collective bargaining rights in the broader public sector by suggesting that the private sector has had it much worse. Earlier, I looked at wage settlements as likely the best test to determine if this was true (it wasn't). 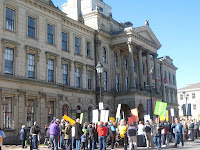 But one could argue that jobs are also a key measure.

So, has the loss of jobs been much worse in the private sector than in the public sector?

This turns partly on the start date chosen. So let's look at it from a variety of start dates.

From this measure, the public sector has done better but there is not a whole lot in it.

From this perspective the public sector has done worse than the private sector by a fair margin.