Deficit? Public spending ain't the cause. Revenue, however...

July 21, 2014
With the election over, pressure to cut public programs has become quite intense. In almost all of the corporate owned media someone is barking on about it.

Another option -- increasing revenue from corporations and the wealthy is not mentioned.  However, data clearly indicates that Ontario does not have an overspending problem compared to the other provinces.

Instead, it indicates Ontario has very low revenue. 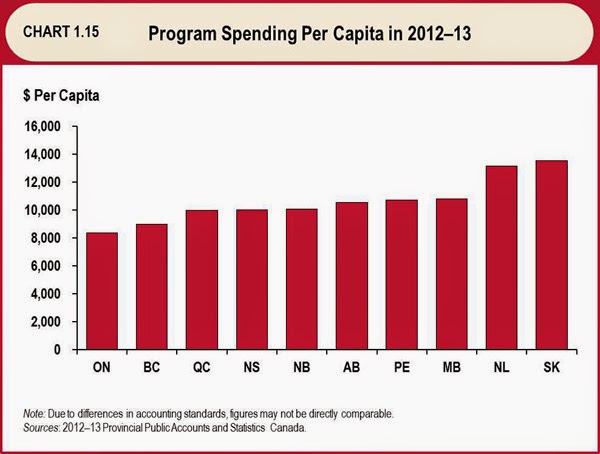 The Ontario government has also now reported in the 2014 Budget that Ontario has the lowest revenue per capita of any province.  This is particularly notable as other provinces are quite a bit poorer than Ontario and therefore have a much more limited ability to pay for public spending.  (Also notable in this chart is the weak role federal government transfer payments play in Ontario finances.) 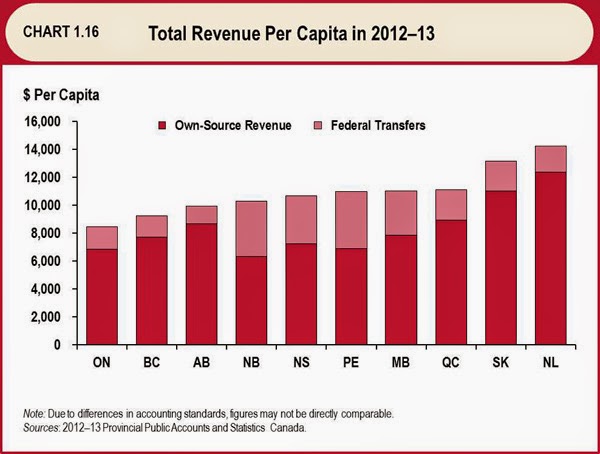 Low Ontario revenue is not a one-year flash in the pan.  Statistics Canada data for 2009 (the last year before Stats Can terminated the series) indicates that Ontario had the lowest per capita revenue at that time as well. And by quite a ways. 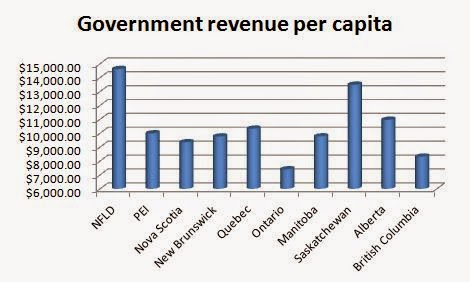 The Stats Can data, however, goes a little further.  It indicates that Ontario has the lowest revenue as a percentage of the economy (GDP) of all the provinces. Arguably, this is better way to compare provinces as it considers the capacity of each province to pay.   Below is a chart comparing "own source" revenues from the various provinces.  ("Own source" revenues are those only from measures imposed by the Ontario government - -they exclude transfers to the Ontario government from the federal government). 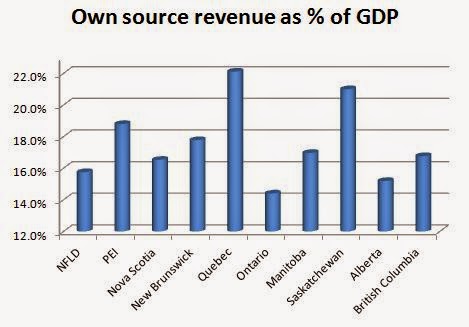 Own source revenue for Ontario was 14.4% of GDP, while in the rest of Canada it was 17.9%, i.e. an astonishing 3.5 percentage points of GDP lower in Ontario. 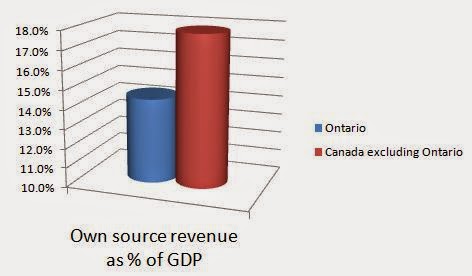 If Ontario had taken the same own source revenue as the rest of Canada, the treasury would have an extra $19.5 billion in 2009. The deficit would be toast and our big problem would be to figure out how to spend the extra cash. 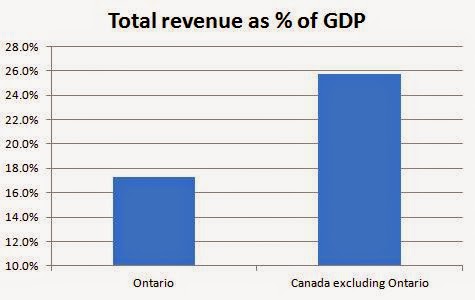 If Ontario hit the level of other provinces for total revenue, we would have an extra $46.8 billion in revenue.

It would be a challenge to spend it all.

Notably, the shortfall that arises simply because of smaller transfers from the federal government to Ontario is equal to 4.9 percentage points of the total Ontario economy -- $27.3 billion in 2009.

Little appears to have changed since 2009.  Using data from the ten year report in this year's Budget, government revenue as a percentage of GDP has remained pretty flat. 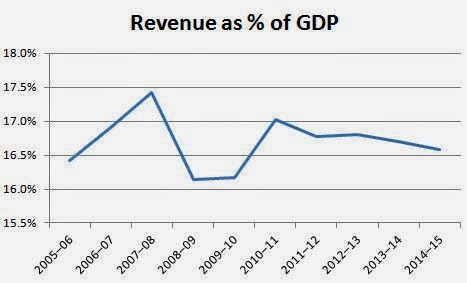 The data behind these charts are attached here -- over two spreadsheets that can be downloaded.

The future?  Despite very low government revenue in Ontario, the Liberal government is not likely to significantly increase taxes on corporations and the wealthy -- unless the balance of power changes in favour of working people.

So working people may be stuck with real spending cuts. Worse, as noted last week, without better job growth, the cuts may have to be greater than currently planned  if the government keeps to its official plan to balance the budget in 2017/18.

Increased inflation in Ontario (now reported at 3% annually) may help improve revenue growth.  But it won't help workers in the public sector who are facing a government determined to keep settlements well below that level.

May 13, 2019
The group that will do the best out of the recent provincial Budget are the doctors.  According to the just released Budget Estimates, OHIP funding (which  goes overwhelmingly to physicians and practitioners) will go up $1.2 billion or 8% compared to last year's Estimates.

(Note -- this is a little different, and less accurate, than the comparisons with last year's interim amounts reported in the 2019 Budget and used elsewhere in this note.  It is the only comparison publicly available for OHIP as of the moment, however. The Financial Accountability Office has suggested that the actual OHIP spend last year would be less than in the Estimates by several hundred million. So the actual increase this year may be larger than $1.2 billion. We will know for sure when the Public Accounts finalize the books for 2018-19 in September.)

This large increase is likely due to the February 2019 interest arbitration award for doctors, an award that was praised as "fair" by Christine…
Post a Comment
Read more